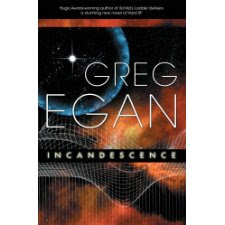 Wikipedia defines hard sci fi as "a category of science fiction characterized by an emphasis on scientific or technical detail, or on scientific accuracy, or on both."

By that definition "Incandescence" by Greg Egan is by far the hardest science fiction book I've read in my entire life. We're talking diamond hard here! If you're into the action-packed drama of space-time geometries, general relativity, and interstellar panspermia...have I got the book for you.

There is a decent story (lost alien race in peril at the forbidden center of the galaxy) buried throughout what amounts to a novel-length discussion of Einstein's theory of general relativity and Newtonian physics, but as a right-brained artist type, I found my eyes glazing over for significant chunks of this book.

Not at all the author's fault as you can tell it's a well-written and carefully reasoned book, but I'm not the kind of reader who's smart enough to appreciate the effort Mr. Egan put into it.

I like sci fi stories about people (alien or otherwise) who have an adventure. I don't need to know about the extremely complicated physics behind that adventure.

Seriously, if you're a gifted scientist/mathematician who delights in theorizing about plasma accretion disks around black holes, you'll totally groove on this book. If you're a dummy like me, not so much.
at June 29, 2009