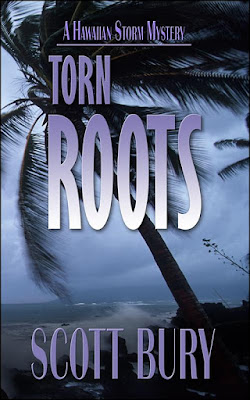 Sam felt furious with himself. He stomped his feet with every step as he walked home. Why did I tell them all that? I practically drew them a map to where Rowan is, and they did not believe that she’s innocent. Not that big goon, Dekker, anyway.

The heat was too intense to let him stay furious. He slowed his pace as he reached the point where Ha’u’o Road branched off the Hana Highway,

“There was no other way,” he said aloud to a small brown bird with a white circle around each eye, perched on a branch just over his head. It cocked its head and chirped, as if answering him.

“I had to give Rowan an alibi, which meant I had to say she was with me all night.”

The bird chirped again and flew off the branch, flitting ahead of Sam along the edge of the road.

Sam rented the last house on the dead-end street, a tiny bungalow made of what looked like scrap wood. As he passed the last koa tree that blocked the view of the house from the end of the road, he saw an unfamiliar, new truck in his neighbor’s driveway.

The shiny new, black Ford SUV, fully loaded with running boards and an extended cab, was out of place. What was especially strange were the tinted windows, almost as black as the paint on the body.

Sam continued up the driveway as if he were going into his neighbor’s house, then cut across the lawn where bushes blocked the view from his own house. He pushed branches away until he could see his house. It was quiet.

He crept around the bushes silently toward the back of his house, and his breath caught in his throat when he saw his back door standing open. Did I leave it like that when I ran out yesterday? he wondered.

That was when he heard the first crash.

It came from inside his house. Another crash followed and the walls seemed to shake. When he heard glass shatter, he ran around the bushes hiding him and across the small yard to his house, taking the three steps to the porch in one stride.

He halted beside the big bookcase when he saw Rowan and Dekker sparring.

Dekker held his fists in front of him, legs apart in a boxer’s stance. Rowan was in taekwondo ready pose: knees bent, shoulder facing her enemy. Her long hair streamed around her like a bridal veil as she again spun, kicking high at Dekker’s collared neck.

Dekker dodged, stepped and jabbed at Rowan. She ducked, did a shoulder roll out of reach, and Dekker’s enormous fist hit the wall, shaking the little house again.

Vanessa Storm thought her first week on the job as an FBI Special Agent in beautiful Hawaii would be about settling in. But she’s immediately sent to Hana on Maui's rain-soaked shore to find a kidnapped woman.

Throw in arson, strident environmentalists bent on stirring up strife between local rights activists and foreign property developers, a chill local police lieutenant, a taciturn geologist, and top it all off with a rogue, unpredictable Homeland Security agent.

The case becomes a labyrinth twisting through the jungles on Maui’s volcano. Vanessa knows this case will explode into an international incident and lives will be lost if she doesn’t find answers fast.

“TORN ROOTS is wonderfully rich with plot and setting, but it was Mr. Bury's command of the story's pacing that impressed me most.”—Eden Baylee, author of Stranger at Sunset

“I made the mistake of picking up this book and could not stop reading.”—Frederick Lee Brooke, author of Doing Max Vinyl

“Made me feel like I was there in person!”—Sue Devers

“I have never been to Hawaii but reading the detailed descriptions of its beauty in this book has made me feel like I've actually been there.”—Joy A. Lorton

Available now for pre-order at a special low price on Amazon.

Scott Bury is the author of 13 books who can’t stay in one genre. His first published novel was thehistorical magic realism novel, The Bones of the Earth. Then he wrote a spoof in the form of an erotic romance, and then a biographical trilogy, The Eastern Front series. He wrote five mysteries and three thrillers over the next three years, and is now working on a sequel to his first novel.
His favourite authors range from Raymond Chandler to Samuel R. Delany to Gabriel Garcia Marquez, Mark Helprin and J.R.R. Tolkien.
He loves to cross genre boundaries in his books.
Born in Winnipeg, he lived in Thunder Bay and Toronto, Ontario. He now lives in Ottawa, Canada’s capital.
In addition to writing, he loves traveling with his beautiful wife, hangin’ with his mighty sons, downhill and cross-country skiing, swimming, whitewater canoeing, hiking, music, food and travel. He muses occasionally about learning how to cook.
You can find more about Scott and his work on his website, Scott.Bury.Author. Connect with him through Twitter @ScottTheWriter, LinkedIn or Facebook at Scott.Bury.Author.