Under the Nazi Heel

Walking Out of War, Book 2

For Ukrainians in 1942, the occupying Germans were not the only enemy. 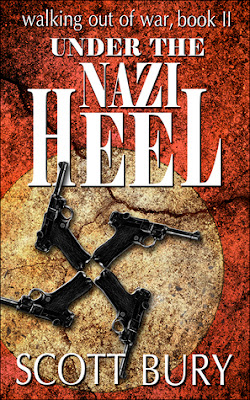 Maurice Bury was drafted into the Red Army just in time to be thrown against the invading Germans in 1941. Captured and starved in a POW camp, he escaped and made his way home to western Ukraine, where the Nazi occupiers pursued a policy of starving the locals to make more “living space” for Germans.

To protect his family, Maurice joins the secret resistance. He soon finds the Germans are not the only enemy. Maurice and his men are up against Soviet spies, the Polish Home Army and enemies even closer to home.

Experience this seldom seen phase of World War 2 through the eyes of a man who fought and survived Under the Nazi Heel.

Find it on Amazon.

After a three-decade career in journalism, his first published fiction was a children’s story, followed by an occult spy thriller. The Bones of the Earth, his first novel, crossed the boundaries between historical fiction and magic realism. He has also published spy thrillers and two police procedurals set in Hawaii.

Under the Nazi Heel is the sequel to Army of Worn Soles. They describe the real life experiences of Maurice Bury, a Canadian living in Ukraine during World War 2.

You can find all of Scott’s books and other writings at his website, The Written Word.

Under the Nazi Heel

Excerpt 1: From Prologue – Attack on the Train

Down the train, doors opened in every passenger car and soldiers and officers climbed out. Men asked “What happened? Why did the train derail? What happened to the engineer?” Officers asked “Any injuries? No? Weapons ready?” Soldiers formed a defensive line, weapons pointed into the forest or toward the lake, but they had trouble holding their rifles and machine guns over the top of the snow.

At the engine, the first two soldiers to come out of the train began to climb the ladder to the engineer’s compartment. The first soldier knocked on the door.

He was answered by a rifle shot from the forest. He arched his back and fell into the snow, knocking the man below him down.

More rifle shots came from the forest, hitting the officers first, then the soldiers with submachine guns. The Germans returned fire blindly. They could not see their attackers and their bullets went uselessly into the trees.

Fire came at the Germans from all sides. Some of the men in the snow tried to climb back into the train but they were cut down, shot in the back. The moonlight turned the blood black on the snow.
A burning torch flew out of the forest, turning end over end to land on top of the first passenger car. Made of steel, it did not burn. But more torches flew, aimed toward the open doors. Most bounced off the sides of the cars and fell into the snow, snuffed.

Then an explosion blew off the rear of the last car and the Germans knew their attackers had grenades. They tried to hide between the cars or under the snow, but one by one they fell. More explosions came from under the train, and then someone managed to pitch a grenade into one of the doors. Smoke followed the muffled bang. Within a minute the men outside could see flames, and they knew they were dead.

One soldier fired his submachine gun in controlled bursts from a hiding spot between two of the cars, but bullets found him. Before his body hit the snow, a comrade took the gun from him and fired a continuous volley into the woods until he was hit three times from different directions.

Beside him, the junior officer who had tried to warm his hands fell with a bullet in his upper thigh. Blood gushing into his long coat, he raised his pistol to his head and blew his brains out before the partisans could take him.

The whole train was ablaze by then. Soldiers jumped out through windows and doors to be killed by more bullets. Within minutes, it was over. All the men outside the train lay dead in the snow, while those in the train screamed as they burned.

Under the trees, men in black uniforms watched carefully. One man shot a German body, just to be sure he was dead, and then the insurgents stood up. In twos and threes, they got into sleighs hidden in the woods, slapped the reins and returned along the paths they had made when they had arrived, hours earlier.

The only sound was the muffled steps of their horses in the snow and the soft roar of the fire, and soon only the fire was left.

The Ukrainian Insurgent Army had begun operations against the occupying Germans.