iAi Bloggers' Book of the Month: 'THE MIGRANT REPORT by Mohanalakshmi Rajakumar 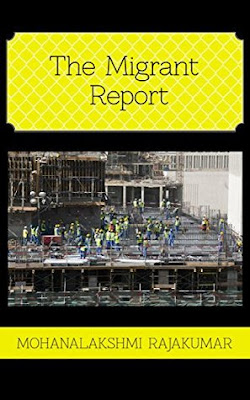 ABOUT THE BOOK: Against the glittering high-rises of the capital, Manu, a recent arrival from Nepal, drips his days away on a construction site, cut off from the world outside the labor camp. His sister despairs of finding him among the thousands of migrant workers flooding into the Arabian Gulf to build the country’s infrastructure. Manu and Sanjana must keep their younger siblings out of poverty, even if at their own expense.

Police captain Ali's hopes of joining the elite government forces are dashed when his childhood deformity is discovered. His demotion brings him face to face with a rising pile of unexplained dead bodies and also an aspiring journalist who is unlike any local girl Ali knows. In danger of flunking out of university, Maryam is searching for an original story that will appease her professor and keep her family’s machinations for marriage in check.

Can the unlikely trio fit the pieces of the puzzle together before agency thugs get to Manu?

ABOUT THE AUTHOR:  Mohanalakshmi Rajakumar's award winning books have focused on various aspects of life in the Arabian Gulf nation of Qatar. From Dunes to Dior is a collection of essays related to her experiences as a female South Asian American living in the Arabian Gulf and named as Indie Book of the Day in 2013. Love Comes Later is a literary romance set in Qatar and London and was the winner of the Best Indie Book Award for Romance in 2013, short listed for the New Talent award by the Festival of Romance, and Best Novel Finalist in eFestival of Words, 2013. She currently lives with her family in Qatar, where she teaches writing and literature courses at American universities.

After she joined the e-book revolution, Mohana dreams in plotlines. Learn more about her work on her website at www.mohadoha.com or follow her latest on Twitter: @moha_doha.
at August 02, 2015