Ordered the proof copies for Leonard on Saturday. HOORAY!!! Granted, I'm a little behind on my goal of making that happen by the end of last month but hey, it's done.

What happens next? I'll get the proofs back by Tuesday 9/6 (I'll post a picture when they arrive) and then get copies to friends for a FINAL error check. After the (hopefully) minor fixes are completed and my talented cover designer Mike Wykowski makes some tweaks, I'll upload the FINAL manuscript and cover files to Createspace. They'll check them for proper formatting, etc., and send me an email saying everything's cool. Then, I will push the "approved" button and at some point within a week or two of doing that, the book will be officially published and listed on Amazon. The Kindle and Nook editions will soon follow.

When will all this happen? I'm hoping it will be sooner rather than later but if you insisted on a more specific time frame  I'd tell you "by the end of September...ish." In the meantime, I'll be playing with a new ebook generator created by my author friend Keith Robinson (he's written a fun fantasy /adventure series called Island of Fog which I heartily recommend). I'll also be working on generating things like postcards and bookmarks as the finalized media become available.

By the way, I've mixed the title around a little, changing it to Dragonfriend (Leonard the Great, Book One). I think this is a cleaner and the single word sounds cooler, imho, and will read better in the Amazon thumbnails.What do you think?

UPDATE: Just got an email from Createspace telling me that my order has already shipped!

WOW! So exciting! Can't wait until the end of September-ish! :) (that's how I tell time too!)

It all sounds very exciting, Roger. Enjoy the process! Oh, and I like the new title.

I'm very excited about getting close to a real live publishing date, doubly so since there were times when I thought the day would never come!

So exciting! I like the title change. Can't wait to see pics when you have proofs!

Hello, fellow campaigner! I'm not in your group, but I still wanted to check out your blog and say, "HI!"

Nice! Sounds like your book is shaping up. Glad to hear it! :)

I am in your campaign group! Dropping by to say hello! Nice blog, and congrats on be so close to publish date! 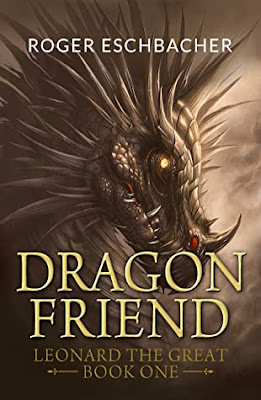