Animation FAQ: Thoughts on How to Sell an Animated Series


Q: I am an aspiring writer/artist/musician with an animated show idea. I have character illustrations, a series synopsis, 12 plot treatments, and music samples that I have worked on extensively. I have a friend who creates and pitches TV shows for a living, but I am not sure about his degree of success in that field. He encouraged me to create the series in the first place. I have no idea how to get my idea in front of people besides my admittedly low-level connection. Do you have any suggestions?

A: Disclaimer: I've come close a couple of times, but have yet to sell a series.

That said...it sounds like you have a lot of the components one would need to pitch an animated
show. The fact that you're a musician who's able to provide show-related music samples might even give you an edge over most.

With regard to your friend, if he creates and pitches shows "for a living" (meaning he gets paid) he is without a doubt VERY successful in his field and not a "low level connection" at all. In fact, he's about as good a connection as you can get. Is he a professional writer? If so, that means he probably has a "literary" agent (an agent that exclusively handles TV, film, or animation writers). Ask him for a referral to his agent.

I strongly recommend having a couple of writing samples (spec sitcoms, well-known animated shows in the same category as your series, even a spec feature script that shows off your style) in addition to your pitch. Write them, then begin the hunt. If your friend doesn't have an agent, once you get the samples, start the hunt yourself. Pursue any other connections you might have and go to the WGA site for a listing of Guild approved agents. Once you have that, start sending out query letters (try to get a name rather than sending out generic "Dear Agent" letters) explaining that you're interested in representation, have a project (don't go into too much detail), list your samples, and ask if they would be interested in taking a look at one (of the samples). If they say yes, you've got your foot in the door.

You didn't mention where you lived, but it'd be helpful if it was in LA or NY. That's where most of the agencies and the production co./networks are located. It wouldn't be impossible to secure representation if you lived somewhere else, just a lot harder. An agency would be more likely to sign someone who's "in town" and available for the meetings they'd set up. The bottom line is that you need to secure an agent if you have any hope of having your project looked at by anyone who really counts. Good luck!

If you have a question about writing for animation, send it to me via the CONTACT tab. If you have your own thoughts about this particular question, please leave them in the comments.
at February 17, 2018

Ghost Star will be promoted via Teen & Young Adult Kindle book deals in the US marketplace for $1.99, starting 5/1/2022 and running th... 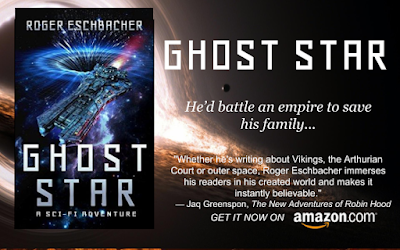