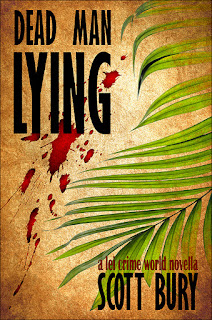 She knows when you’re lying …FBI Special Agent Vanessa Storm is back on Maui to catch a killer.

As the killer, or killers, strike again and again, Detective Lei Texeira and FBI Special Agent Vanessa Storm must untangle the lies spun by the singer’s associates, friends, family — and the singer himself before the music dies.

Even though it was only a mile to the village of Hana, Lei took more than ten minutes to drive there in the rain. The wind was strong enough to shake her truck, and when they finally parked at the Travaasa Hotel, the biggest in town, they both hesitated before running through the downpour into the open concept lobby. By the time they reached the desk, they were both drenched.

A half-hour later, checked in, showered and dried, they sat in the hotel’s restaurant. Vanessa had a glass of wine in front of her, Lei a pint of beer. They were off the clock, waiting for their meals, but they couldn’t help talking shop.

“So what did you get out of the interviews?” Lei asked just as a thin blond girl with colorful tattoos down her arms put their plates in front of them. Vanessa waited until she was out of earshot to answer.

“Mostly that everyone is lying,” she said. “Everyone I spoke to is hiding something.”

“I can always tell.”

“The superhero? No. Everyone gives off little signals when they lie. It’s caused by stress.”

“Those are two. But there are other common signals, too.”

“But couldn’t that just mean the person is feeling stressed? In a case like this, there are lots of reasons to feel stressed.”

“It’s not a perfect system, but it’s usually pretty reliable.”

“So, how did you develop the ability, if you’re not Daredevil?”

“I studied it in university, and kept up my studies since. I have a Bachelor’s degree in clinical psychology from the University of Vermont, Burlington and a Master’s from Columbia.”

“Wow. Well, I can’t argue with that. But I got the same feeling as you — everybody on this estate has something to hide. The widow, the current Mrs. Sangster, seemed to be more angry at his death than sad about it.”

“She let out a lot of grief when I was alone with her,” said Vanessa. “Maybe she’s more angry at the family than at her husband. Her late husband.” She took a bite of her fish. I love Hawaii, she thought. “It’s too bad we had to stop that argument. Some interesting facts came out.”

“I thought so, too. Like Kathryn calling Isabel a tramp. Do you think she really was sleeping with Steven Sangster?”

Vanessa nodded. “Without a doubt. She admitted to me that she was in love with him, had been since she was a teenager.”

“That figures. That’s why she came out here from the mainland — to work with her childhood hero and heart-throb. Sangster was really handsome when he was young.”

“I remember,” Vanessa smiled and sipped her wine. She thought of the one time she had seen Sangster play, in a club in New York City, part of a comeback tour — and a real come-down for a star who once packed the country’s biggest stadiums. He was still handsome, then, close to fifty years old, but still with those rugged features, thick dark hair and beard streaked with grey, and those amazing blue eyes that seemed to pierce the heart of every woman in that audience.

“I remember, too. Too bad his son didn’t seem to inherit any of his looks,” Lei said.

“What do you think of that shot at the heiau? Was someone shooting at us or at Simon?”

Vanessa heard Lei’s phone chime, and she pulled it from a pocket in her jacket. She looked at the screen and said, “The crime scene investigators haven’t found anything in the way of a discharged or missing shotgun. They checked all the guns in Sangster’s collection, especially the shotguns,” Lei said. “Either none of them had been fired, or if it was, it was cleaned really well and then coated in a fine layer of dust.”

“So that means the weapon that shot at us is not one of the collection. Of course, the shooter probably wouldn’t have had time to return the gun to the collection before we got back to the house.”


After a three-decade career in journalism, his first published fiction was a children’s story, followed by an occult spy thriller. The Bones of the Earth, his first novel, crossed the boundaries between historical fiction and magic realism. He has also published spy thrillers and two police procedurals set in Hawaii.

You can find all of Scott’s books and other writings at his website, The Written Word.
Read his blog, Written Words
Find him on Facebook at Scott Bury Author
Visit his Amazon Author page
Or follow him on Twitter @ScottTheWriter.