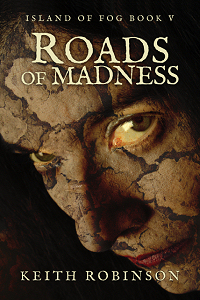 Book 5 in the excellent Island of Fog series, Roads of Madness picks up where the exciting Lake of Spirits left off.

When the legendary phoenix does its thing and takes all the magic with it, shapeshifter Hal and several of his friends are stuck on the wrong side of an inter-dimensional "worm hole" connecting a post apocalyptic Earth (ravaged by a brutal virus that kills most and leaves behind hideously scarred and ruthless survivors known as "scrags"), and a largely bucolic world where magic and magical creatures still abound. Normally the scrags wouldn't prove much of a challenge to kids that can change into creatures like a dragon, an ogre, and a naga, but when the magic went away, so did their ability to shapeshift. Aided by a mysterious boy who appears immune to the plague, the stranded and "powerless" friends must make their way through scrag infested territory, past bio-suited active military units, and across a stretch of ocean to their original island home - all in the hope of finding or creating a new portal back to their friends and family.

As usual, author Keith Robinson delivers the goods by keeping the story moving and crafting memorable characters and exciting action sequences. Roads of Madness is a satisfying addition to this series and is highly recommended.
at May 17, 2013