This Time I Am the One Being Interviewed

Author Scott Bury interviews me and fellow iAi member Gary Henry about our writing styles. I call mine "cinematic" while Gary describes his thusly:

"I like to think of my writing style as “snappy” — using active voice and vivid verbs to the best of my ability. I try to vary sentence length and incorporate colorful description."

Wait a minute. I like "snappy," too. Head on over to the Guild of Dreams and check out the full post (and insert "snappy" everywhere I use "cinematic").
at October 25, 2012 No comments:

Email ThisBlogThis!Share to TwitterShare to FacebookShare to Pinterest
Labels: fantasy, interview, the craft

Buster Reads Dragonfriend (aka "I Am Reasonably Certain This Was Photoshopped") 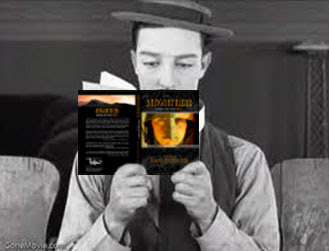 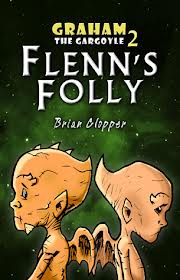 Told with plenty of heart and good humor, Flenn's Folly is a delightful tale that will easily entertain middle grade readers with its exciting action and  fun exploration of the fascinating mythological creatures that people the fantastical world of Cascade. Recommended.
at October 21, 2012 No comments:

This has been a great week in terms of work and writing-related by-products. In addition to turning in a fun outline for my next Littlest Pet Shop script, I was able to swing by a certain place to pick up my assignment for the sooper-seekrit new project that I've been praying/hoping to be a part of. A non-disclosure agreement prevents me from telling you anything about it at this time (insert "but I'd have to kill you" joke here or, more accurately, a "they would have to kill me" joke), but let's just say it would be an awesome show to work on and I'll share details when I'm allowed to do so.

To give you an idea of how excited I was to be at the certain place, I hugged the producer of the show -- twice -- and I'm not much of a hugger at all. Fortunately, she's a friend and seemed to accept the hugs in the spirit they were intended.

As a bonus, I got a lot of work done on Giantkiller -- reorganizing it from a prologue and seventeen chapters of disturbingly uneven length (the shortest being 917 words and the longest being 14,058) to a prologue and thirty much more balanced chapters. 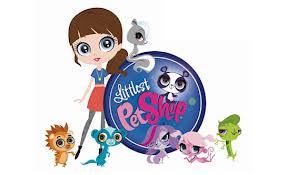 While there are no curmudgeonly dragons or mischievous wizards to be found on Littlest Pet Shop, I'm pleased to report that the show I've been writing on for almost a year is going to start airing next month on The Hub TV Network. In addition to the hyper-adorable character designs, there's some smart and, imho, funny writing attached, too.

What's the show about? From the press release:


“Littlest Pet Shop” follows Blythe Baxter and her father as they move into a Big City apartment above the Littlest Pet Shop – an amazing day-camp for pets of all kinds including a doggie diva, dancing gecko and sweet, adorable panda.  Her real adventure begins when she discovers that she alone can miraculously understand and talk to all of the pets.  She joins them on fantastical adventures that include uproarious song-and-dance sequences featuring all-new original music."

Sounds fun to me! Littlest Pet Shop, or LPS as we showbiz insiders call it, is a hoot to write for and I'm hoping the viewers will get a kick out of it, too. I'll post more details as they become available. Here's the promo:

A Take (or two) on Author Rank

SF author John Scalzi has an interesting take on the new Amazon author rankings. He kicks off his post by stating:


"Amazon has started ranking authors by total sales via Amazon, updated hourly. This is certain to make a whole bunch of authors begin to freak out as they constantly refresh their Amazon author pages to see where they stand in the rankings..."

The "freak out" part is where I have a problem with Amazon's new set up. Personally, I think if a writer pays too much attention to all of this ranking business it can be counter-productive, quite literally. When a higher portion of creative energy goes into promotion and its accompanying worries over actual writing, then there's something wrong with the equation. Does that mean an author, specifically an indie or self published one, shouldn't do any promotion at all for his or her books? No, of course not. But there has to be a balance and I think some folks are more worried about, as Scalzi puts it, "gaming the system" for their current books, than the much more important challenge of writing new books.

Other than a pathetically low-key social media presence, my not too terribly complicated marketing/sales plan is to write books that readers want to read. Yup, that's the plan in its entirety. Hopefully, I'll write enough books that I can build up a decent backlist. With a decent backlist and enough readers reading my books, there's an outside chance that I'll be able to earn a living as an author (which is, no matter what you hear, the ultimate goal for any author). I don't care what my author ranking is (no I haven't looked) and I'm pretty gosh-darned sure that I never will care.

I'd love to hear your thoughts on this. Please let me know what you think about Amazon's new round of rank-o-mania in the comments.
at October 10, 2012 9 comments: