Showing posts from November, 2011
Show all

Wouldn't You Really Rather Write Fantasy? 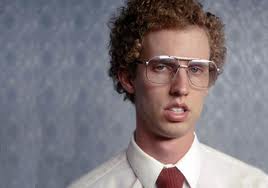 "Pedro, just listen to your heart. That's what I do." -- Napoleon Dynamite

Jaq writes from Lithuania (via Goodreads):

"How did you come up with the idea for "Dragonfriend"? Did you always want to write about dragons?" Thanks for the question, Jaq.

It's funny. I've known for the longest time that the first book I ever wrote would be a relatively hard sci fi novel. Just known it. After all, that's the genre I started out reading and that I read the most of over the years. That was the serious branch of speculative fiction, right?

Then, along came NaNoWriMo (the novel-writing contest where the goal is to write 50k words in the month of November) and what ended up coming out of my brain? A middle-grade Arthurian fantasy adventure jam-packed with magic and dragons, the most popular of all the mythical beasts of fantasy fiction. Where did all of that stuff come from?

Gee, I guess maybe all of those fantasy stories I'd b…
2 comments
Read more

A Nice Gift from Amazon

For the time being, Amazon has decided to discount the Dragonfriend paperback by nearly 30%.

It surprised/alarmed me when I saw the price change on the book's page last night, but I was quickly assured by customer service that it doesn't affect author royalties which are calculated off the full list price. On the other hand, it does save you some decent bucks so if you're interested in owning an analog copy of my book, this may be the time to act.
4 comments
Read more

Real Books on My Doorstep! 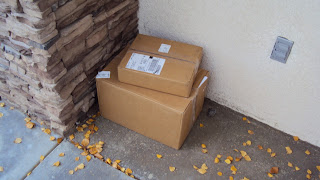 They're here! My first shipment of Dragonfriend paperbacks arrived this week in all of their two-box, back-breaking glory. This order is primarily destined for the folks who helped me get the book published -- beta readers, etc. and the backers of my Kickstarter project. I'm also setting aside a few copies for the local school libraries, signings, and long-time "book friends."

I know the whole eBook thing is all the rage with the kids these days, but we here at the Novel Project (meaning me and Lizzy, the Border Terrier) love the heft and feel of holding a "real" book in our hands/paws. Right, Lizzy?

Elsewhere in the news, there's still time to enter my Goodreads Dragonfriend giveaway (20 days a/o 11/23) so, if you haven't already done so, head on over and sign up. Five lucky entrants have a chance of being plucked out the the scrum by a soulless Goodreads algorithm.

Finally, a very Happy Thanksgiving is wished for the folks here in the States.…
7 comments
Read more

Dragonfriend is Now on Smashwords 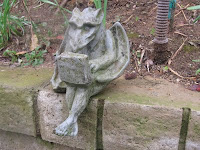 Set up a Smashwords account last night. It was pretty easy to do although they are sticklers for what they consider proper formatting. Not saying they shouldn't be, they just like things the way they like them. The good thing is that they lay everything out for you in their style guide and quickly bounce back an error report if their "autovetter" finds some formatting it doesn't like. All free, too.

So in addition to the Amazon and B&N accounts, thanks to Smashwords you can now read an ebook of Dragonfriend on these devices, too: Apple iPad/iBooks, Sony Reader, Kobo, and most e-reading apps including Stanza, Aldiko, Adobe Digital Editions, others.

And there was much rejoicing.
2 comments
Read more

Win a Free Copy of Dragonfriend!

Well, as you might guess from this post's headline, I've just published my middle-grade fantasy novel, Dragonfriend. It's currently available at Amazon (print and Kindle formats), Amazon UK (Kindle format) and at B&N (Nook format). I'm working on setting up a Smashwords account, too, so check back later if you prefer to use them.

I've ordered a big ol' box of paperbacks to distribute to area libraries, beta & proof readers, reviewers, and Kickstarter supporters (I financed the setup of Dragonfriend through that excellent service) and should receive them sometime around Thanksgiving. This leads me to the paperback giveaway over on Goodreads (see the widget on the right). I thought it sounded like a fun thing to do (Hey, who doesn't like free books?!). Go ahead and enter if you think you might like to win a copy.

You might also notice that I've added a "My Books" tab in the navigation bar above. If you click on the tab you'll find …
2 comments
Read more

Although I really wanted to do it, I'll be taking NaNoWriMo off this time around. I'm so close to publishing Dragonfriend (doing one last read-thru of my one last proof copy) that I want to focus on making that happen and doing it right.

Side note: Surprisingly, the errors I'm finding are far and few between (yay!) and seem to be of the formatting variety -- things like a lone hyphenated word appearing in the middle of a line ("mat-ters") and some missing italics. Super minor mistakes that can easily be corrected.

Also, I'm very close to finishing the first draft of the second book in the Leonard the Great series: Giantkiller. I want to jump on that as soon as I get things squared away with the first book. As any author knows, building your backlist is incredibly important and is directly connected to building your reader base which is directly related to someday supporting yourself with your writing.

As a bonus, last month while I was still thinking I mig…
4 comments
Read more
More posts