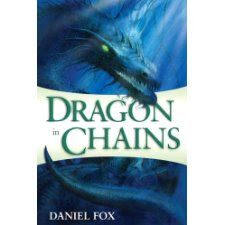 A fascinating look into a world that is largely ignored in western fantasy fiction, Daniel Fox's "Dragon in Chains" is a welcome detour into the realm of Chinese culture and mythology. Fox masterfully weaves several complicated storylines, each centered on a different young man -- the boy Emperor fleeing a deadly rebel General, a jade miner with supernatural strength and endurance, and a maimed river rat who uses his mind and magical chains to keep a great dragon imprisoned beneath the waves. The world Fox invites us to explore is so detailed and vividly described that (to use the old cliche) it really does feel like you're there -- in other words, a superb "escape read".

My only complaint about this otherwise excellent book is that the ending comes on too quickly for my taste with the exciting climax literally occurring on the very last page. I don't insist on an epilogue, but I do like to know how everyone ends up and we don't really get that here. In this case the abrupt ending appears to be a little too obvious setup for a sequel -- but, hey, that's okay as I'm very much looking forward to returning to this fascinating world. Recommended.
at September 16, 2009