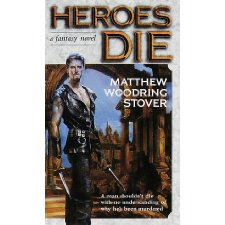 "I guess I'm a relative latecomer to the whole sci fi/fantasy mashup thing but dang! I am loving this sub genre!

Like Williams' "Implied Spaces", Stover's "Heroes Die" is a perfect blend of hard sci fi and sword and sorcery style fantasy. On Earth, Hari Michaelson is a wildly popular actor whose off world adventures are recorded through his eyes and sent back real-time for the amusement of his fans. On Ankhana, Hari is known as Caine, perhaps the most lethal assassin who has ever lived. When the "link" to his ex-wife, (also an actor) is mysteriously severed and a clock starts ticking toward her demise, Hari contracts to go to Ankhana and save her -- realizing that with the lethal forces arrayed against him, it may end up being his own personal "series finale".

Magic, technology, swordplay, and fey creatures abound in this richly told tale that is so well done and captivating, I'll be immediately moving on to the next book in the series. Highly recommended."
at May 01, 2009

What a cool concept, recording your adventures through your eyes and broadcasting it remotely...

Absolutely! This is an awesome book. I recommend checking it out whether you're into this genre or not. A very entertaining read.