I'm always interested in how things "work" in fantasy worlds so when author Christopher Kellen offered to do a guest post, I asked him to fill us in on how magic works in his The Elements of Sorcery series. Please welcome Christopher as he fills us in on... 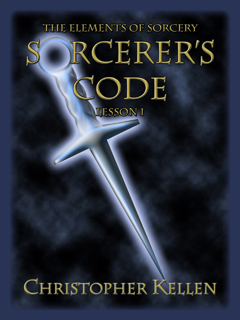 The first book I wrote set in the world which would eventually become Eisengoth was ELEGY—my 2008 NaNoWriMo project and the first book in my flagship Arbiter Codex series. I began around a single thought: what if the magic in a fantasy world was toxic to the touch? If that were the case, there would need to be someone who was immune to that danger, and that's how the idea of the Arbiters was born.

Magic in Eisengoth is centered on the life-force known as manna. I named it that because it is the only essence on which my Arbiters subsist. They have no need for food nor drink as long as they have a steady source of manna on hand. In its pure form, when it is flowing properly, manna has a brilliant blue glow. In places where it concentrates, it forms crystals that push their way up through the earth. The problem is that the light from the manna is deadly to anyone that it falls upon, sucking out their soul and turning them into a fel beast—in other words, a monster. This is handled in cities by surrounding these crystal formations—known as manna fonts—with a particular kind of white marble which is not degraded by the radiant energy of the magic.

Manna can also become corrupted, either by the direct will of human beings or by a long-term association with negative actions, or mass deaths. When corruption takes hold, the life-force becomes a hot crimson, and begins sucking the life out of the surrounding area. A place too long infected with corruption becomes arid and cold; plants wither and die, and animals begin transforming into fel beasts at a much faster rate. 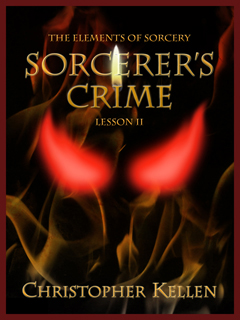 Corruption is associated with the actions of the dark gods; even speaking their name is considered to be a dangerous curse that could call them out of their slumber to eat the offender alive. The dark gods' agents are known as daemons; these are intelligent, malevolent, otherworldly creatures whose aim is to manipulate, deceive and destroy humankind. Thankfully, there aren't many of them.

There are two kinds of magic-users in Eisengoth. First are the Arbiters: dangerous warrior-monks trained from childhood to hunt and slay fel beasts and unravel corruption. They are immune to the direct deadly effects of the manna thanks to the enchantments provided by a small artifact known as the heartblade. This also gives them some limited ability to direct manna through themselves and use it for fire-based attacks, as seen in ELEGY. (Due to potential spoilers, for more on the Arbiters and their abilities, you'll have to check out the Arbiter Codex.)

The second type are sorcerers, also known as witches, warlocks, necromancers, or just about any other epithet you can think of to describe them, depending on their particular focus. All of these types utilize sorcery, however, which is a specific method of creating a channel inside the mind which allows them to draw in the deadly manna and re-shape it using a variety of mental tools. Sorcery exists in two subtypes: evocation, which is a direct draw and re-shape of manna through the mind's channel, usually in the form of an elemental result (Eisengoth lore uses the five Chinese elements: wind, water, fire, metal and wood); and enchantment, which is a much more subtle process of creating a set of specific rules that bind the power in a certain way, forcing it to flow through a series of logical statements, which are usually written in a dead language. I like to think of enchantment as magical computer programming—you set up the machine ahead of time and then send the spark of power through. It takes more time to set up, but is much less dangerous than evocation. 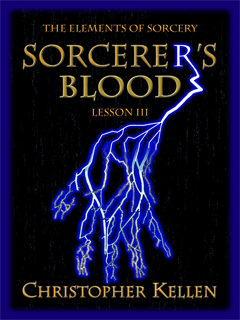 A 'true' sorcerer is able to perform both enchantment and evocation, but most would-be practitioners don't survive their first attempt. Creating the mental channel is far from easy, and there aren't a whole lot of practicing sorcerers willing to risk their neophyte apprentice turning into a fel beast and eating off their master's face when they go wrong!

THE ELEMENTS OF SORCERY focuses on the tale of how Edar Moncrief, a maker of love potions and wart remover (and competent sorcerer in his own right) gets tangled up with an Arbiter, and how his life gets irrevocably screwed up from that point forward. It's swords-and-sorcery written with an urban fantasy sensibility—like if Jim Butcher (author of The Dresden Files) wrote stories based on Robert E. Howard's Conan and Solomon Kane. There will be five installments when it's finished; each is novelette to novella-length, ranging between 14,000 and 19,000 words so far, and they've been getting steadily longer.

Enter the giveaway below for a chance to win a set of the first three installments in THE ELEMENTS OF SORCERY, including a pre-release copy of the latest, Sorcerer's Blood, to be delivered at least three days prior to its worldwide launch!

Thanks, Christopher. Very interesting! To find out more about Christopher Kellen and his books, please visit his website, Eye of the Storm.
Posted by Roger Eschbacher at 10:24 PM