As part of the Magic Appreciation Tour, I was given the opportunity to interview Mark Tierno, author of two epic fantasy works, Maldene (Volumes One and Two).  A blend of science and sorcery, these books are set in "a world of magic and ancient secrets" where a band of mercenaries find themselves at odds with a dark wizard who may just be "the most evil being ever known."

Mark lives in Monrovia California and has earned a Masters in Physics and a second degree in Math. He's a lifelong reader of fantasy and SciFi and started writing his books with the help of his "trusty old Amiga computer." Talk about old school!

I found him to be a very interesting fellow and I'm quite sure you will, too.

Your Maldene novels are a mix of science and fantasy. What inspired you to blend the two genres?

I've always loved reading both SF and Fantasy.  Couple that with a mind that's always asking "What if?" and it wasn't long before I began asking myself "Why can't you combine the two?"   After all, a high enough level of technology begins to look like magic anyway.  Magic plus Science, Fantasy plus SF; such a combination could yield some very interesting environments.  The trick is avoid the sledge hammer approach in combining the two; something more subtle than just "He's got the blaster and the other guy has the magic wand."  A more subtle blend is required.

Maldene starts off as looking like pure high fantasy; the SF elements begin to peek through as the series develops until by the last books you would be hard put to tell where one ends and the other begins.  And yet, even in this first book there are clues, subtle hints that something beyond the norm of mere Fantasy may be at work.

There's enough people that write either straight SF or straight Fantasy.  I'll leave that to them and handle the mixed genre stuff.

Does your background in science and math affect how magic works in your stories?

My background gives me a logical and informed mind.  So when it comes to magic, I treat it as just another force in the universe, though one that allows quite the range of fantastic capabilities.  Nevertheless, like any force it would have its rules, as well as its own logic.  For instance, a wizard uses his mind to channel the forces behind magic, which means he can get tired after a while and would need to rest.  And if a magic spell conjures forth something physical then the normal physical laws would still apply.  A conjured lightning bolt is still electricity and could be conducted away by something like a lightning rod.  If there is a cave in which the conjuring of magic is prevented, one could still conjure forth a ball of fire from outside the cave then hurl it inside; it's simple fire at that point and not magic and would still burn even with the magic-nullifying field present.

It is this insistence on logic and the remembering that there are other physical laws present that the laws of magic must interact with that can make even a world of magic believable within its own context; provide that suspension of belief required for a reader to believe in the circumstances, feel as the characters would, and enjoy the story.

Are you still using your trusty old Amiga? If not, what hardware and software do you use to write your novels?

My Amiga still lives, though two years ago I had an offer from a friend to buy off his G5 MAC tower.  Having a need to interact with the real world a bit more- in such things as being able to read the PDFs my publisher gave me as the galleys for my book, and having web browsers that can actually fully load up thew social media sights that I need to promote Maldene with- I took him up on the offer.  Currently my trusty old Amiga lies silent but simply because I need to re-seat the graphics board and don't want to do it when I'm in a hurry lest I let something slip the wrong way and find myself in need of a very expensive repair.

For the record, it's an Amiga 4000/060.  During the course of writing the Maldene series I went through three keyboards and two motherboards.  Just wore them out from the pace of my typing.

What are your thoughts on the overall trend toward digital publishing?

Digital publishing will make it possible for the unknown author to at least get a start and have a chance at becoming known.  However, like in any field, there are both the good and bad.  One has to beware of a poor quality product in something as new as digital publishing with its dozen different formats and lack of any real industry standards.  Likewise for the digital publishers themselves, most of them with a track record of no more than 3-5 years instead of being spawned off an older traditional publisher with more publishing experience in general.

I also do not think that the traditional published novel is dead (at least not yet).  There are still some of us that like walking into a bookstore, taking one glance at a wall full of 50 or 60 books, and spotting that one that stands out enough for us to pull it down.  You still can't do that with even the best broadband (not to mention you'd need a screen the size of a wall to get the same view).  Tablets are getting pretty good, but they aren't flexible enough to stuff in a back pocket like an old paperback, not to mention if you ever lost it on the buss you'd be out a bit more than 2 dollars.

I have a three day cycle for each chapter.  Day One begins the new chapter; I start at 7:30 in the morning and finish someplace around 5PM, give or take.  I will have written between 12,000-13,000 words in that time.  Then it's off to the length club for a bit (must maintain the body supporting the brain) then back for dinner, at which point I edit what I wrote that day.  Usually finish up around midnight.  on Day Two, I finish up whatever's left of that chapter; usually around 3000-5000 words.  Done by Noon (leaving me enough time to run those mundane daily errands), edit what I wrote later on.  Day Three is what I call a Chapter Edit.  I go through the entire chapter one more time, checking for plot and character stuff, then run the spell checker.  Once done with that chapter I then outline the next one that I'll be starting, so the day after that it's back to Day One on the next chapter.

My books are typically divided up into three sections, so at the end of a given section I also give the whole thing the once over to make sure that the plot elements from one chapter to the next are consistent and flow properly.  Likewise at the end of the book, I give the entire novel one last once over.

Who are the authors on your "inspired by" list and what about their lives or works inspired you?

Growing up I read quite a few; from Robert Heinlein and Issac Asimov, to Andre Norton and A.E. Van Voght, from Frank Herbert to Greg Bear.  From each one's works I took a little something; it could have been some element of style of writing or the way the story was constructed, or something about their world as written or one of the characters.  I have been inspired by many authors, and taken something from all of them.  To get a full view of how I developed my own style, from whence come all my ideas of story and character, you would have to read through about a hundred different books, twenty different authors (some rather obscure), and have seen a selection of as many movies.

Any "wish I would've known that when I started" advice you'd like to share with beginning authors?

I know writers are a solitary lot, but learn to socialize, to "network".  Agents are lazy by nature and will usually reject a new author because it's too much work and risk to promote them.  Publishers too are usually rather conservative and need a better reason than "but it's a really good book".  Now in this day and age of online networking, a writer can start forming useful contacts from the comfort of his own home and maybe drum up enough interest amongst the right parties to have a potential publisher by the time he's finished his book.

You will also need one of two things.  Either a supportive family or patron that knows you'll be a starving artist for a while before succeeding, or a day job that works with your writing schedule.

Great interview! Thanks for doing it, Roger. And thanks for sharing, Mark.

I'm not sure I would want to be a full-time writer myself. I have too many other interests. But it sounds like you have turned writing into a productive career. I hope Maldene is a great success! 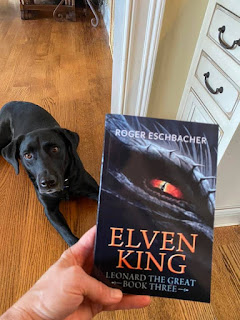